The Suzuki Celerio aims to offer the interior space of the Splash with the price and economy of the Alto. Such attempts are usually doomed to failure, but the Celerio, with its perky 1.0-litre three cylinder engines, big spec list and optional AGS transmission, looks to be one city car made of all the right stuff.

The core engine in the Celerio range is a 1.0-litre three-cylinder petrol unit developing a total of 66bhp at 6,000rpm and 89Nm of torque at 3,500rpm, so you're going to need to give the throttle pedal a bit of treatment to get anywhere. Especially if you opt for it with the brand's efficient AGS automatic gearbox. This system features an Intelligent Shift Control Actuator positioned at the top of the transmission that operates the gearshift and clutch automatically. With AGS, the driver can enjoy the ease driving of an automatic in city traffic, but without any loss in fuel efficiency or increase in CO2 emissions that would normally be the case with a conventional torque converter equipped automatic transmission. There's even a low speed 'creep' facility which allows the car to move in gear without the accelerator being applied, ideal for a top city car coping with slow traffic and when parking.

The alternative Celerio powerplant is another 1.0-litre petrol unit with the same output, this one using Suzuki's more efficient Dualjet technology. Power goes to the front wheels via a five-speed manual gearbox at first, but we suspect that most UK buyers will want to talk to their dealer about matching the Dualjet engine technology to Suzuki's Auto Gear Shift (AGS).

The Celerio city car probably isn't going to turn too many heads, being a fairly generic-looking urban car in the modern mould. That's not to say its styling lacks merit, just that it's nothing too adventurous. The most notable flourishes are probably the deeply sculpted flanks, with an arcing swage line that runs just below the door handles. The front grille is unusual, with a three-bar design that kinks upwards at each extremity into the big headlight pods.

The body measures just 3,600mm from stem to stern and 1,600mm wide, so parking it shouldn't present too much of a difficulty. A height of 1,530mm and a non-slanting roofline affords respectable headroom in a city car for occupants. The 2,425mm long wheelbase provides a tandem distance of 743mm, which gives plenty of space in the cabin for five occupants. The boot is vast for a city car, with a capacity of 254-litres.

The Suzuki Celerio is always going to be overshadowed by the best small cars, the state of the art city slickers like the Volkswagen Up or the Renault Twingo, but it was never really designed to compete with the more high-end offerings of the city car sector. It's easy to overlook the fact that after the Hyundai i10 and the Volkswagen Up, the biggest selling city car in the UK in 2014 was the Suzuki Alto. The Celerio looks set to do even better than the Alto, with its super-low emissions and clever transmission.

If you want a city car that is utterly no-nonsense, easy to use and which we'd bet will prove to be extremely reliable, the Celerio demonstrates that these qualities needn't cost you the earth. The fact that it's well-equipped and is incredibly cheap to run is just the icing on the cake. It might not seem an obvious best small car to buy on first acquaintance, but give this one time. We think it could be the sleeper hit of the year. The Vauxhall Viva is a small city car runabout that relies on substance to make sales. Is this a risky strategy? Not really. When we compare small cars, the most practical models make the biggest numbers and this 1.0-litre five-door hatch looks to have all the right objective figures sewn up.

The Viva has been built around Vauxhall's latest 1.0-litre three-cylinder petrol engine. In this guise, it makes 75PS worth of power, which is probably about adequate for a city car. More engines may be announced in time, but the powerplant requirements for a small urban car like this are usually quite simple. Models of this sort don't cover enough miles for a diesel engine to be worth fitting and lighter is better if you want the sort of jinky manoeuvrability delivered by the best urban runabouts.

This ECOTEC 1.0-litre engine drives the front wheels via a five-speed manual gearbox and the suspension and steering has been optimised for comfort on the sort of pock-marked streets that typify most British cities. Like its bigger brother, the Adam, the Viva gets a 'City' mode that lightens the steering even further to help take the effort out of parking, a great city car attribute.

Vauxhall's previous city car offering, the Agila, was a model that never really got the credit it deserved, but the Viva looks set to do better. The styling is neat and assured, with none of the overtly cutesy flourishes that make certain small city cars very gender specific. The Viva could well appeal to lads as well as lasses, with its purposeful front end, signature Z-slash that runs through the door handles in the side swage line, plus some neat alloy wheel designs. It's available in ten exterior paint colours with a variety of 14- to 16-inch wheel choices. Designed by Mark Adams' team in Europe, the Viva is built at GM Korea's plant in Changwon and is a sister car to the new generation Chevrolet Spark model that Britain now won't get.

The interior looks well built and maturity is again a dominating theme. There's a signal lack of over-design, with a simple but classy two-dial instrument cluster, plenty of headroom, a chunky steering wheel and clearly legible minor controls - what you want in a best value small car. If you'd prefer something a bit more outre and personalised, then it's simple to step up to the brand's trendier ADAM model, though you'd need a bigger budget to do that. At 3,700mm long, the Viva is marginally longer than a Fiat 500 but has space for five inside (just!) due to a wheelbase that's fully 100mm longer than that of a Peugeot 108.

The Vauxhall Viva is clearly taking the softly-softly approach to urban car sales. It's relying on buyers to appreciate its common sense and its no nonsense approach to things. And it's hoping they'll value its maturity and quality over styling gimmicks and marketing stunts. Okay, so the Viva badge unashamedly plunders a bit of retro appeal, but Vauxhall needs this car to be noticed.

Ultimately though, the basics just have to be right for a model to be viewed as one of the best small car in this segment. The nation's best-selling city car is the Hyundai i10, a car that does all the important, sensible things really well. This Viva looks to have been designed to follow suit.

Time will tell. The early signs look promising, Vauxhall having given this car every chance to succeed. A British badge with German heritage from an American company on a car that's screwed together in Korea? It just proves that even with tiny city cars, manufacturers have to think big. 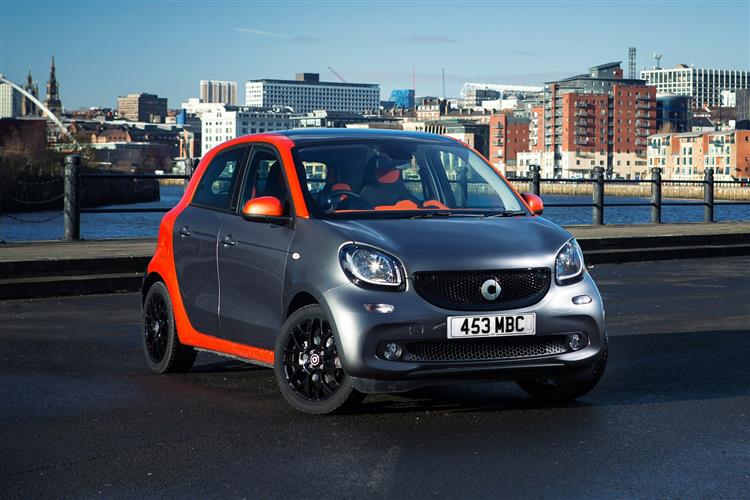 The smart forfour is a city car that really does work smarter. With the engine in the back, it's astonishingly manoeuvrable and delivers excellent fuel economy from either a 1.0-litre or a 0.9-litre turbo powerplant that makes it one of the best value small cars around. The interior's agreeably funky and this time round it really does look like a stretched fortwo - because that's what it is. There really wasn't a lot of mechanical commonality between the old smart fortwo and the forfour, but this time round, the forfour is essentially a stretched fortwo, in this instance sharing around 70 per cent parts commonality with another city car, the Renault Twingo. Customers get to choose between 71PS and 90PS engines, the former a normally-aspirated 1.0-litre unit and the latter an 899cc turbocharged item. Unless you knew beforehand, there is little in this great city car's handling characteristics that suggests it's rear-engined.

Neither of the two engines are particularly rapid, and both will require a bit of rowing along on major roads. The 71PS car gets to 62mph in a yawnsome 16.9 seconds, while the 90PS models take a more presentable 11.9s, but that is small city cars. Smart promises better refinement at speed compared to the Twingo thanks to additional soundproofing. Another piece of good news is that the hideous semi-automatic gearbox that plagued smarts for years has been ditched and in comes a slick five-speed manual 'box with a six-speed twin-clutch automatic following on its heels. The 8.65m turning circle means you'll have no problem diving back for a parking spot and the steering has been deliberately made very light to make this small city car's manoeuvring extra simple.

Whereas the old forfour really had to stretch to try to carry off the smart family look, this one couldn't really be anything else. It really does look like a smart fortwo that's been Photoshopped into something longer and shares the smaller car's pug-like front end and the hallmark tridion safety cell. There's a lot of shape in the flanks for a city car, from the swage lines near the door handles to the almost Volvo-like shoulder line that's most apparent as it melds into the rear light cluster. Look down and there's a genuine concavity to the lower door panels, smart going a bit further than sticking a curved detail on there as you'd get on a Renault Clio or Captur.

The cabin features as many quirky touches as you can stomach and it's good to see smart, even with a value small car pushing the boat out a bit with colours and textures, including a technical mesh finish. At the prices charged, this should be a city car that feels premium and different putting it ahead of the best small cars on the market. It's still not huge inside, and the boot measures a mean 180-litres. The good news is that the rear doors open to 85 degrees (which makes getting in the back simple) and the rear seats fold completely flat, offering up to 975-litres of space.

We're pretty impressed with the latest smart forfour. The pragmatic engineering that underpins it gives this top city car some real advantages. No front driveshafts means that the wheels can be steered to a 45-degree angle, giving it otherworldly manoeuvrability. Packaging the engine in the back isn't a real issue for a city car that's rarely tasked with heavy hauling duties.

It's a small, city car that looks and feels special inside but which hasn't been unrealistically priced. We'd like to get our hands on one of the dual-clutch automatics and put that through its paces, but for the time being, this smart forfour makes a convincing case for itself. If you prefer a city car that is anything but the anonymous econobox, it's got a strong claim for your custom.